Washington Tales from Closer to the Center

It's very early on Sunday morning. The quiet outside belies the exuberance that promises to explode today here in Washington.

This new "chapter" in my "Canterbury Tales from the Fringe" blog needs to be renamed, of course. It could be "Mr. Robinson goes to Washington," or "Oh my God! How did I ever get to this moment?" Instead, I'm calling it "Washington Tales from Closer to the Center." After the experience of being on the fringe in Canterbury this summer, I am struck that the new President of the United States is including me in a way the Anglican Communion was not able to this summer. Funny, isn't it, and sad, that the culture is modeling for the Church the inclusion meant for all of God's children.

One of the great bishops of the Episcopal Church, Stephen Bayne, once said, "MISSION is looking around and seeing where God is already at work, and joining God there." God, and God's mission, will go on, with or without the Church. My prayer is that all of us in the Church will "see and know that things which were cast down are being raised up," (from the opening collect for ordinations, which I prayed at an ordination yesterday morning). In his invitation to me to offer the invocation for the opening inaugural event, I hope that gay and lesbian, bisexual and transgender people everywhere will feel "raised up" by the events here in Washington. I know I carry all of you in my heart.

Arriving at National Airport yesterday was like coming into a recently-stirred-up anthill. But there were no angry, impatient voices (okay, I did hear one!), no one in a bad humor. Faces filled with anticipation and sheer joy at being here. Was it my imagination, or were all the African-Americans walking just a little bit taller? I think so. I hope so. And so was everyone else.

I am, to say the least, overwhelmed by the possibilities of this day. Not just offering a prayer for the nation and the new president, but helping to kick off the beginning of a new era of hope in this nation. The hope that then-candidate Barack Obama talked about -- and which was often decried by others as hopelessly (literally) labeled as unrealistic and maudlin -- is about to become reality. The future won't be perfect, of course, and the new president won't be either. But what a new beginning!

I am also overwhelmed and humbled by the task ahead of me. This prayer has weighed on my heart for several weeks now. My words will be the first heard by the crowds who will have been standing, waiting, for six hours to witness this event. I figure they'll be ready to listen, and grateful that the event has finally begun, or maybe they'll start chanting "Springsteen" or "Bono" and wishing the clergy guy would just get out of the way. Either way, I will attempt to get the crowd to pause for a moment before the fun begins, and join me in a prayer that we can all pray together.

I have received a lot of critical email since announcing that my prayer would not be overtly or aggressively Christian, as most of the inaugural prayers of the last 30 years have been. My plan is to address this prayer to the "God of our many understandings," acknowledging that no one Christian denomination nor no one faith tradition knows all there is to know about God. Each of us is privy to a piece of God, as experienced in our faith tradition. My hope is to pray a prayer that ALL people of faith can join me in.

In the end, in addition to doing all this for God, I will be thinking of three kids in the teeming crowd of people today. One of the priests in my diocese, Teresa Gocha, and her husband Jim, adopted three children, Martin and Malcolm, African-American boys, and their mixed-race sister, Margaret. They'll be here in Washington to witness the inauguration of someone who looks like them! They will never forget it, of course. But what they'll REALLY remember is that someone just like them can be president, can be acknowledged for who he is and not just the color of his skin. Everything changes this week for Martin, Malcom and Margaret. It changes for all of us. This is not something that the American people alone have done. This is God's doing.

Pray for me today. Pray that I can point to a God who loves us all, who yearns for the best we can be and do, and who is constantly raising up those of us who have been cast down. Thanks be to God! 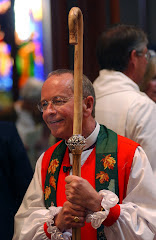